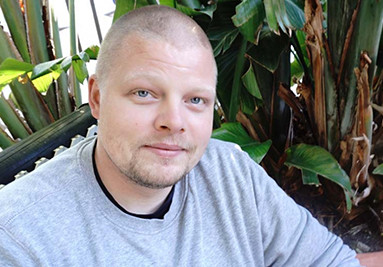 “Hemp made me a smart guy.”

Kim Velf on How Hemp Oil Healed His Brain Injury

For Kim Velf the hardest part of dealing with a brain injury was convincing people that something was wrong. The loss of his hospital file meant it was impossible to confirm his condition or provide him with the right treatment. It wasn’t until he met a psychologist at the age of 25, seventeen years after his accident that he was finally given the tools he needed to begin his healing process. Two years later, encouraged by his mother, he began to take hemp oil. After that, his life changed radically

You had an accident when you were 10 years old. Can you tell us about it?

My parents got me a horse when I was 10 because I loved horse-riding so much. They wanted to see me riding the horse, do some tricks, that kind of thing. I was a skilled rider but the horse started to run fast and I’m not sure what happened but I lost control and fell off. As I was falling, the horse kicked me in the head. I don’t remember any of this happening but my brother saw it all. When my mum saw me lying on the ground she thought I was playing and told me to get up. She didn’t realize I was unconscious. I woke up four days later. The doctors told me later if the impact had been 2mm lower, it would have killed me.

What treatment did you receive at the hospital?

Though the force of the kick didn’t break my skin, my skull was shattered. The doctors had to remove some of my left-side frontal lobe and put my skull back in place using five titanium clamps to hold it together. After I woke up from the coma, I was moved from intensive care to the pediatric ward. I was in the hospital for fourteen days. The doctors said it was a miracle I survived.

What was your rehabilitation process?

I never got any physical sickness from the accident. My only symptom was a headache. I spent the next six months at home and my mum took care of me. We visited the hospital to monitor my progress. The doctors said I was fine. I have no memory of that time.

How bad was the headache?

It must have been difficult to cope with it?

Actually, the pain wasn’t the worst part. After six months of being at home with my mum, I went back to school and I was put in the weird situation of trying to convince myself there was nothing wrong with me because no one else believed there was anything wrong with me. I was trying to fit in and be normal and act like everything was fine when it really wasn’t.

Why did no one believe you?

Two reasons. First of all, the hospital lost my file, which meant there was no medical record of my injury. As far as the medical community was concerned, my accident never happened. Secondly, brain injury is often called the “Living with an Invisible Disability” https://www.differentbrains.org/traumatic-brain-injury-tbi-living-invisible-disability/

It’s not like having a broken leg or cancer. People can’t see what’s wrong so they think you’re fine. And on the outside, everything seemed fine. I could compete with my classmates at every level. My grades were okay. But my self-esteem was so low I was severely depressed. In my last year of school, I was suicidal. I couldn’t accept who I was because the system was telling me I was normal when I wasn’t. No one believed me when I told them something was wrong

The opposite. I was God’s best child. For my confirmation, I took my parents out for dinner while all my classmates were out celebrating with each other. I didn’t have my first beer till I was 16 but I didn’t like the taste. I was never interested in drugs. From the age of 16 to 18, I spent every evening and every weekend helping my dad refurbish his house. I joined the army because it was my dream to be a soldier. But after one month I started hearing voices and the army kicked me out. Another dream was gone!

Why did they begin to take you seriously?

I started to get bad pains in my back. The doctor didn’t know why. But it got so bad I was fired from my job. The local authorities stepped in and offered a course to help me get back to work. As part of the assessment, I had to write about my past. That’s when I realized how much it affected me that no one believed me. As soon as I acknowledged that, the pain in my back disappeared. My doctor’s wife worked in a brain damage rehabilitation center so he suggested I go there. They understood me and were the first people to take me seriously. I’d seen so many psychologists over the years but they could never help. At the center, they appointed a psychologist to work with me and she was different. She peeled back the layers and really helped me to see who I was and understand my condition.

Did that set you on the right healing path?

Yes and no. Around the same time, my first child was born and that broke me. Because of my anxiety, I spent all my time worrying about my daughter and all the terrible things that could happen to her in this terrible world. All I could think about were disasters. I kept a survival backpack in the basement of my house. I spent most of my days in bed sleeping. I’d get up for a few hours to pick up my daughter from kindergarten and then I’d have to go back to bed. Even simple tasks like going to the shop to buy milk wiped me out. I was tired all the time. That was the worst part. It got so bad, I finally decided my girlfriend and daughter would be better off without me and I left my family. –

-That was a big decision.

‘Yeah but after one week I missed my girlfriend and daughter so much, I returned to them. The problem was my psychologist had helped me accept who I was and my limitations but I still had to accept the situation or find a way to cope. I was so tired all the time. I had no energy to live or give my girlfriend and daughter the support they needed. I felt like such a failure.

Is that when you turned to hemp oil?

Well, my dad started having back problems and my mum got some hemp oil for him to ease his pain. They told me it cured cancer, that it was a good thing and that maybe I could take it too. I thought they were crazy. This was an illegal product that wasn’t endorsed by the medical community so there was no way I was going to take it. I was so against it I was even thinking of turning my parents into the police.

What changed your mind?

I was desperate to feel better, to live a normal life, to spend time with my daughter.

What dosage did you begin with?

I took 3 drops a day for two weeks, felt no different and posted on Facebook that it didn’t work. That post to cause a reaction! No one believed me. They said I didn’t know what I was talking about.

Did that change your mind?

No, it was actually my girlfriend and my family. I didn’t feel the difference but they noticed it.

What was the difference?

When did you get serious about CBD oil?

About four months after I began taking it, I woke up one morning in a sweat. I’d had a dream, my first dream in seventeen years. I was confused because it felt so real. That was the first time I realized it was working. Then I started to feel my anger and depression leaving me.

How did you get your CBD oil?

I remember buying 5ml of 27% CBD oil for €671.73 from a Grow Shop and feeling like a criminal. Six months later, the government classified CBD as medicine but there were only a handful of doctors that would prescribe it and it was very difficult to find those doctors. Only one doctor advertised his willingness to prescribe it but his waiting list was about two years long. Thankfully I met a guy who was taking it for his own condition and then another and another, which gave me better connections and made it easier to get.

How has taking hemp oil changed your life?

Today, I’m on the board of the Danish Brain Injury Association and work part-time as a carpenter. I started my own company selling hemp products and seeds. I love gardening and have won a local community competition for Best Garden two times. I attend seminars and give talks on my experience. I even found the energy to have another kid. I’m a different person, a happy one. I make better decisions. My life is full of great people. I like to say hemp made me a smart guy.

This interview has been edited and condensed.